A selection of testimonials received from past customers. 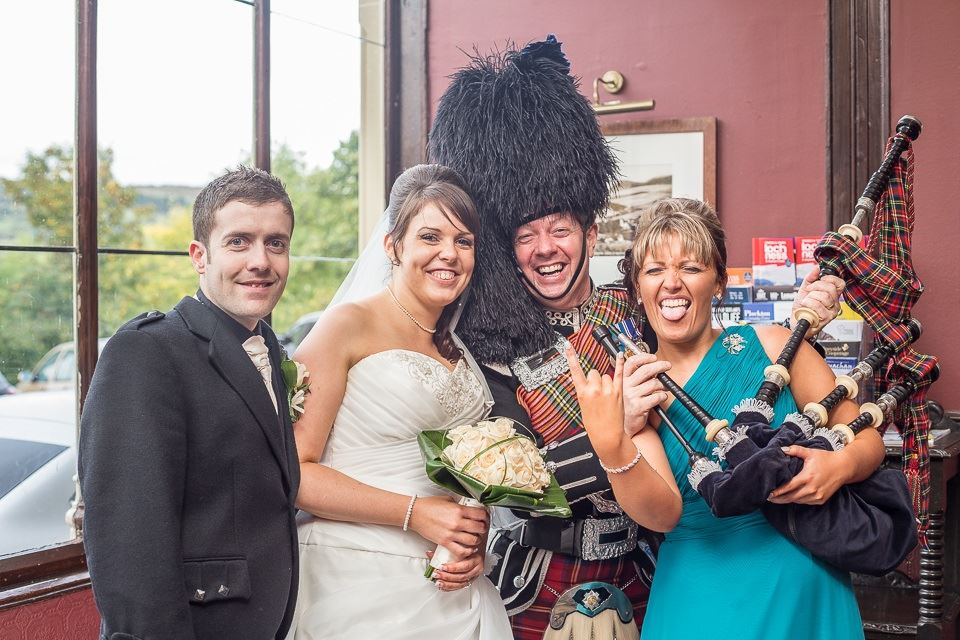 I would like to thank you for piping at my daughter’s wedding at Achnagairn House.

Your warm and friendly nature shone through as you welcomed our guests and they were mesmerised when you began piping, especially those who had travelled from Australia and America to share our day.

Your piping ability, immaculate uniform and presentation coupled with your warm and friendly manner had our guests enthralled and many later commented on how much they had enjoyed listening to your extensive repertoire. You surpassed our expectations and made the day truly memorable…especially the treasured photograph of the groom trying to play your pipes!

We would have no hesitation in recommending you to anyone wishing to book a piper for their wedding day.

Wishing you every success for the future.

My daughter Gina got married on 27th July 2014, which to most is just a normal run of the mill day. Unfortunately for me this was not the.case.

Gina got married in her home town of Thurso, loves her tartan, loves her pipe music, actually loves all things Scottish

Thurso, Caithness has local pipe band, loads of pipers so getting a piper should not be a problem. Thurso pipe band celebrated their centenary year in 2014, that’s where my problems started.

I hunted high and low, unfortunately no the day of my daughter’s wedding all local pipers were attending prior engagements for the celebrations. Not wanting to disappoint my daughter we would have to go further a field and have to pay the cost, as to those that don’t know Thurso is on north coast Scotland.

Lucky for us this is when Dougie stepped in. He agreed to play on the day, travel 4 hrs there and back at no extra cost, which when it comes to weddings is a massive bonus.

On the day Dougie did us proud, in full Highland dress on a roasting hot day. Even strangers have asked me where we got Dougie from. His personality shone on the day, such a happy relaxed man, I couldn’t have asked for more.

My daughter wanted traditional music but I do know that Dougie is very capable of adapting modern music also, his ability is amazing.

Every bride should have a Dougie on their special day.

I was a very lucky girl on my wedding day, 20th July 2013, at Bogbain, Inverness with the wonderful weather, could not ask for more. As it came to walking down the aisle, felt so surreal, and felt truly happy, but having the best of people there, and also Piper on Parade, before my Bridal Party, felt amazing, then he began playing the pipes, just had butterflies in my belly, the sound of the music, was amazing, and to me, felt truly proud to be Scottish, especially with Piper on Parade fully kitted out looking so professional and smart, though I did feel sorry for him in the heat that day, but he was professional from beginning to end. He gave my wedding a touch of magic that day when he played, not just for me, but everyone there, touched everyone’s hearts that will last forever. When, I met Piper on Parade, he was genuine, professional person and felt comfortable with him, and felt 100% assured that he was going to make my day special and perform in a professional manner the way he did. I will certainly be booking Piper on Parade again, and I would recommended to anyone.

I personally could not recommend you highly enough to friends and family. I contacted you only 5 weeks before our wedding, hoping you would be free and able to pipe at our wedding, and when you got back to me so quickly I was absolutely thrilled!!! The service from the very start to finish was second to none. You went above and beyond your ‘job’ and it was even more than I could ever have imagined!! Everyone commented on how good you were and how smart you looked! And the below photo says it all in my eyes!!

In a nutshell: He looked extremely smart and was very professional; he piped at a very high standard with music we had requested; he did everything we asked for and more so we were absolutely delighted with hiring him as our piper for such an important day in our lives.

We contacted Dougie, via a recommendation, for our son’s wedding on the 16th of August last year. We spoke on the phone to confirm the event and to convey that we would like him to pipe us all down to St Columba’s Episcopal church in Grantown on Spey from our home which was just 5 minutes away (we have since moved). Dougie has a very pleasant phone manner so it was easy to discuss our requirements. Following our telephone conversation he confirmed our requests by email very promptly – an important acknowledgement. He also directed us to his website so that we could see what he would look like on the day.

On the day he turned up in plenty of time looking splendid in his No 1 dress, also known in Scots Guards “parlance” Full Ceremonial order, complemented by an eye catching feather bonnet carrying the Hackle. After meeting everyone and when we were ready, he led the groom and the wedding party down Woodlands Terrace to the Episcopal Church at the bottom of the road. At the church he piped a repertoire of all the tunes we’d chosen and some he had recommended. He has an excellent command of music and performed accordingly.

After the service he piped the wedding party out of the church and whilst photographs were being taken. When the bride and groom were ready, followed by the rest of us, he piped us all back to the reception at our home. On arrival at the reception Dougie continued piping until all our guests were back in the house.

We were blessed with a sunny day and to have Dougie, looking absolutely resplendent in his full ceremonial uniform, accompanying us to the church and back and piping at the initial stages of the reception was something that will stay with us forever. He is also a very professional but amiable person with a naturally friendly disposition so would fit in with any occasion. Dougie was eager to pipe the music you wanted and to recommend music so you get a maximum benefit.

I would like to thank you for your performance on our wedding day on 1 June. You were there on time and dressed very smartly and you kept the guests entertained with your playing until my arrival. You then piped me into the venue with the most beautiful music. After the ceremony ended you resumed the playing in the forest and this made the posing for photographs enjoyable instead of a chore. When we headed to the cars we walked behind you and then you played all the way back to the car park, and this would have been for a good 10 minutes.

We then met up at the reception venue where you continued playing whilst the guests enjoyed Champagne and appetisers. Finally you piped me and my new husband into the dining hall. Your presence really gave the wedding a Scottish feel and also enhanced the photographs taken on the day.

You have really made our day.

As we said at the time we could not praise you highly enough for what you did for us. Your professionalism before and during our daughter’s special day was outstanding. We really
appreciated the fact you came to see us and went through every detail of the day to ensure you were exactly where we wanted you to be, doing exactly what we wanted you to do.

There are many good pipers in this part of the world and I know lots of them having been the manager of a pipe band for a number of years. However, there was never any doubt in any of our minds that you were the one we wanted. Your choice of tunes and piping on the day was excellent. With my background, turnout is important to me and again, you excel in this field. There is nothing to compete with number one dress, complete with feather bonnet to get the hair on the back of the neck bristling. Again, there are others who have it – but the difference is you know how to wear it.

Finally, all our guests have commented, complementing you on your turnout, bearing, skill as a piper and a general entertainer. They loved the informal bit you did for us at Castle Leod, wandering among the guests, chatting to them and playing requests. It was a really nice touch.